There has been a lot of changes in the past few months -- getting engaged in April and at the end of this month, I'll be moving from Malaysia to Singapore to take a new job. I'll be working at Singapore's National University(NUS). It's been ranked among the top 20 universities in the world by The Times of London and among the top 3 in Asia by Newsweek. I have always wanted to work in a university, but it is often very difficult to get the first job. Three years at NUS should open many doors for me.

I will be a lecturer there at the Centre for English Language Communication (CELC). Most of my students will be non-Singaporean undergrads and graduates who have enough English to pass NUS's initial exam but not enough to earn a degree in their disciplines. The Centre also hosts conferences and publishs a journal. So, there will an opportunity for me to continue to conduct research and perhaps get published again. I start at CELC on 2 July. If you would like to see more about where I will work, you can look at the NUS website at www.nus.edu.sg/celc.
Posted by Dara at 10:12 AM No comments:

I'm on a sort of working holiday during the school break in Malaysia. A friend of mine has done volunteer work here for the East Bali Poverty Project for the past 3 years. EBPP works with a group of very isolated hamlets on slopes of one of the biggest volcanoes on Bali. The Indonesian government didn't know of the hamlets' existence until the late 1990s. As a result, the people there had no schools, health care or access to the outside world. Some hamlets had an almost 50% infant mortality rate and a high rate of mental retardation. The mental retardation was mostly caused by iodine deficiency. The people grew only corn and cassava. Cassava hinders the body's ability to absorb iodine.

EBPP has been showing the villagers new farming techniques to prevent erosion, irrigate and fertilize organically. They have also introduced new crops such as tomatoes, spinach and potatoes. All of the children and women of child-bearing age receive iodine supplement tablets and they have been educating the villagers about bacteria, parasites and how to prevent them. The villagers also had trouble with water. In the rainy season there was too much and in dry season there was too little. They built a series of reservoirs to store and manage it. You can see more of their work and projects on their website at http://www.eastbalipovertyproject.org/.

Some of the villages requested EBPP to set up schools for the children since the nearest ones were a 3-4 hour walk. The children have 1 hour a week for English and this is where I am helping the foundation. The children have such little knowledge of the outside world that most of the English teaching resources available wouldn't be suitable for them. The children don't know about modern conveniences such as TV or telephones. They don't really understand concepts like hobbies or occupations. Nobody in their village has the time or resources to devote to hobbies and everyone they know is a farmer. The villages and the foundation wants them to have some knowledge of English so that the children can communicate with foreign donors, fill out forms and read simple things such as an instruction pamphlet or the directions on a bottle of medicine. My plan is to help the education team plan a syllabus to organize what the children should be learning over an extended period of time and to help them make their own textbooks and other classroom aids.

So far, it has been very interesting to think about ways the teachers can overcome the special problems they face in the villages. So interesting that I don't mind missing out on the typical tourist activities here on Bali.
Posted by Dara at 1:57 PM No comments: 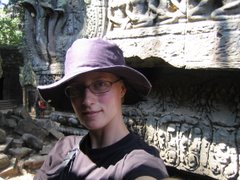